The Thinking Policeman – An Interview With Lex Ferenda 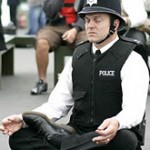 “At his best, man is the noblest of all animals; separated from law and justice, he is the worst.”

This bit of wisdom, as observed by Aristotle, has since evolved into a movement to protect people from one another in the form of a public service. Policing as a concept has been around for thousands of years, but much of its progress has arguably been in the past hundred years following exponential growth in the world’s population.

In the ancient western worlds of Italy and Greece, there were groups of people whose role in society was to physically uphold the law, deal with criminals, make arrests, and guard policy-makers. When Rome’s population reached one million, the use of wards sprouted up to house those who didn’t feel like adjusted members of society – Police then were known as “Vigiles Urbani” (“Watchmen of the City”) who were also firemen and night watchmen.

We eventually realized the efficiency and optimization caused by specialization, and split firemen from policemen. Nonetheless, the general philosophy from ancient Greece has since lived on in the general form of what we have today as a police officer. The roles of which have evolved alongside the complexity of society, and we at Home Security Systems have been lucky enough to interview a philosophically-inclined policeman on what being part of such a historic service is all about.

Lex Ferenda has been in the world of policing for nearly 30 years, and his experiences in the force have spawned much philosophical thinking on his part, culminating in Lex being in charge of half the response team in his county in the UK, and the generous sharing of his experience in his blog: The Thinking Policeman. Lex was kind enough to answer some of our questions in his usual thought-provoking and philosophical manner:

Q: Tell us a little bit about your history with policing – When did you start?

A: I joined a county police force in the early 1980’s. In those days you spent your first two probationary years on foot patrol on the beat learning many skills. I then worked on the single crewed panda cars and progressed to work on the double crewed crime car. This was the aim of most officers who wanted to move on to CID. You had to prove you were a ‘thief taker.’ By 1985 I was on CID and worked there for two years. Most detectives stay on CID or move on to one of the squads such as drugs or burglary, working undercover on surveillance. I decided that CID was not for me. The work was largely desk bound, making phone enquiries and completing court files. At that time a significant amount of drinking was also involved! I liked the cut and thrust of uniform work, dealing with incidents as they happened on the street. I returned to uniform and was promoted to sergeant shortly afterwards. I worked as a uniform sergeant for 13 years. For that time it was the best job in the world. I enjoyed developing new officers and the responsibility of dealing with incidents as they happened and being as proactive as possible. I would have been happy spending the rest of my career in that role.

By 1999 the changes taking place in the organisation meant I was no longer enjoying the role as much. I was constantly being frustrated by management decisions and change within the organisation that brought more pressure on the front line with fewer resources. I decided I needed a change and that I wanted to have more influence in management decisions. I took the exams and was promoted to Inspector shortly afterwards. My new role gave me a lot of autonomy and responsibility and, again, I enjoyed this for many years. For the last two years I have been in charge of a response team covering half the county 24/7.

Q: What are the roles of a police officer?

A: At the risk of really coming across as a dinosaur, if I am asked what the police should be doing I usually quote the nine principals of policing accredited to Sir Robert Peel. I have summarised these below:

Q: Has policing evolved during your career? If so, how?

A: The police service today bears little resemblance to that which I joined. If I watch an episode of Heartbeat on the television that reminds me of the police service I joined. An officer from the fifties or even thirties could have been dropped into the police then and would not have felt much out of place.

Over the last 25 years the changes within the police have outstripped those of the previous 100. There have been a number of reasons for this. Firstly, a raft of new legislation has been introduced placing more accountability’s and responsibilities on the police.  Secondly, the modern world of Internet and mobile communications is increasing demands on the police. Thirdly, successive Governments have become obsessed with efficiency, targets and value for money.  Finally, promotion hungry senior managers have been allowed to use the service as an experimental ground for various management strategies that generally take us in cycles and achieve very little.

Despite a large increase in police funding and resources these teams and departments have taken significant resources from the front line.  The numbers of officers left to respond to emergency calls has reduced to worrying levels. The numbers of officers working 24/7 and trained to deal with public order incidents has reduced to less than 20% of Force headcount. Police staff were once less than 25% of the Force headcount but are now 50%.

The Internet has increased demands on the police from online fraud to Facebook bullying. Mobile communication has made our job more difficult with offenders being able to communicate far more easily. It has also resulted in more allegations of crime such as offensive/threatening text messages. So much police time is wasted on immature behaviour resulting in criminal allegations. Many of these we should not be dealing with. Schools, parents, children’s services should be dealing with most of them but choose to cover their own backsides by passing it to the police; worried that one of these cases might go wrong and hit the press.

In 1983 the Home Office issued Circular 114/83 entitled Manpower Effectiveness and Efficiency. Ever since then various Governments have tried, and largely failed, to effectively bring time and motion, targets and budget control to the police service. Targets have included crime reduction, detection rates, response times, arrest rates, public satisfaction, etc. etc. The problem is that policing is such a disparate, divergent function it is impossible to measure everything. Targets can often be achieved by manipulation of figures and resources. If you want crime reduction, managers will find reasons not to record it. If you want detections, additional resources will be moved to departments to achieve it. Many important functions that are not measured suffer as targets are chased elsewhere. Spending an hour with an elderly victim of burglary may not tick any boxes but attending the next 999 call within 10 minutes does.

The latest Home Secretary, Theresa May, has stated that all she wants the police to achieve is crime reduction. I support that (it goes back to Peel again) with the proviso that the figures should be those of the British Crime Survey and not the Forces own recorded crime which can be manipulated. This should result in long term strategies to achieve reduction rather than short term, ineffective reductions that only support senior managers’ career progression. I think there is room for a second target of public satisfaction. There must be some measure of visibility, quality of service etc.

Chief Constables used to reach that rank and remain for some years providing stability of direction. That no longer happens and Chief Constables and their Assistants come and go every few years. When appointed they want to make their mark and change the focus of the Force and introduce new targets and goals before moving on to their next appointment. Underneath them we have another tier of senior managers and middle managers who want to impress and introduce changes to achieve the new goals before moving on up the ladder. When the next leader arrives the changes that have taken place are sometime derided and more changes introduced often resulting in us going back to where we were two or three Chief Constables ago.

I am not against change but we need to move away from continuous short term strategic changes and settle into a more focused, long term strategic plan to move the police forward in the direction the public and government wish us to go. Some of this is starting to happen with Force collaboration but there is still much to do.

Q: What are the most common type of calls for police officers? Why do you think that is?

A: The most common type of call would be categorised as anti-social behaviour. This can be drunken behaviour but is more commonly poor behaviour by young people who hang around the streets.

I will try and be brief but my view is that this is a symptom of our society. We have poor parenting, ineffective education and a justice system that has no deterrent factor and doesn’t alter behaviour.

We have a growing underclass that are producing children, often with absent fathers, and the mothers have inadequate skills to be effective parents or have little interest in bringing them up decently. There is no longer any peer pressure brought about by society to stop this behaviour or indeed help those who cannot cope. Liberal doctrine now dictates that we are no longer allowed to criticise the ‘choices’ of others no matter what it costs the rest of us. In my view the August riots are a symptom of the society that we have created and unless our society and justice system alter significantly there will be more similar incidents.

Q: How can people ensure they are protected when outside of their homes?

A: In general, residents and visitors to Britain are very safe and the chances of being a victim of crime are low. There are some areas where those chances increase, almost exclusively in parts of city centres.

There are some basic things that people can do to ensure they are safe in public places.

As you can see, there is much to upholding the laws as a police officer, and Lex has had the opportunity to spend much of his time thinking about the dynamic qualities of being a police officer that many of us have never considered – Thanks Lex, we really appreciate you interviewing with us!