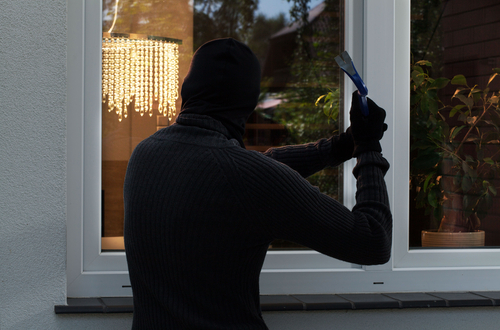 Burglars are generally lazy individuals who don’t want to do more work than they have to. Burglars would prefer just opening an unlocked door or crawling in an open window rather than picking a lock or breaking the window.  So, as a homeowner, one thing I’d suggest doing is to tap into your inner Blane Nordahl and start thinking like a thief. To do this, I would encourage you to role-play and pretend to be a burglar looking to gain access to your home.

To start, go out and look at your house from the front, the sides, and then the back of the home.  While doing this think of all the ways you, as a pretend mastermind burglar, could break into the house.  For instance, are there trees or shrubbery around the windows? Are there dark places for the burglar to hide? Are there even easier places to break in?

The next and, in my view, most efficient step you can take to prevent burglars from breaking into your home is to install a security system.  This will generally bring a peace of mind that your home is being protected 24/7 by reliable security companies.  I have seen on TV specials that if burglars see a simple security sign in the yard or on a window, it detracts potential burglars from attempting to break into a home.  Think about if you attempted to break in, would you stick around once that blaring alarm sounded or would you split to your next potential heist? But modern security doesn’t just stop there. With the home automation technology that many prominent security services provide, homeowners can enjoy an extra layer of protection even when away from home. Access video feeds of your home via your smartphone or tablet; securely let your babysitter in with remote access of your home’s locks. You know that old saying, “you can’t be in two places at once?” Well, as far as safety is concerned, this seems to be a fleeing reality.

Perhaps the easiest and most often overlooked step of preventing others from breaking into your house is simply making sure your doors and windows are locked.  This is one of the first places a burglar might check for access, by simply turning the handle or possibly lifting a window.  The same goes for the garage door.  If you have a sliding glass door, try placing wooden bars to give an added form of stability to those trying to break in.  If that’s not aesthetically pleasing, as a nightly routine before going to bed, go around the house and make sure every window and door is locked. As a mock burglar, you probably won’t be on your nightly routine until you’re sure the residents have gone to sleep. Be one step ahead of the thief.

Another way to prevent burglars from breaking into your home is to have your locks changed every year or so. Disappointingly, thinking like a burglar could often be synonymous with thinking like a family member or an ex-friend. Since there is no guarantee as to who has a copy of the key, regular lock changes could be the difference between having a safe home and one that’s welcomes intruders with a red carpet. I have to admit that for this tip, I have failed miserably. As a matter of fact, when I’m finished here, I think I’ll go right out to buy new locks for my doors.

Going along with locks and keys, I recommend that homeowners not put a spare key outside.  I have been amazed at the stupidity of my own family, friends, and others who hide the spare key under a rock next to the door, on top of a window sill, under the doormat and other places which would leave burglars smiling and saying, “Thank You”! Remember that as a burglar, you might be lazy, but you’re also cunning. Although one doesn’t have to be that cunning to recognize one of the oldest tricks in the book.

On a sneakier note, burglars are great at noticing who is home and who is not.  Do you have overgrown grass or tall weeds and bushes? This could be a sign that you’re on a summer vacation or have been away from home for a while. Thieves also look for newspapers left on driveways and mail overflowing from the mailbox. If you are going on a vacation, discontinue your newspaper service, and have a neighbor collect your mail or have it stopped during the period you’ll be gone.

I briefly tapped into a burglar’s frame of mind just yesterday when my neighbor bought a beautiful 60 inch plasma TV.  How did I know that?  He put the box out in his yard for the garbage men.  This is a ding ding for potential burglars.  Burglars love seeing giant boxes for appliances, TVs, and pretty much any equipment.  To solve this conundrum, I suggest that you break down the boxes into little pieces and put them in a trash bag, if possible, or take them out when you see the garbage men pull up.  Also, never leave appliance boxes out for an extended amount of time or during holidays.

As you’re looking around your home, do you have your porch lights on? What about motion sensor lights (if you already have some type of security system) or a hallway light that’s visible from your windows? While we all like to save on our electric bills, these lights could deter a burglar from entering a home where occupants could still be awake and moving around. Home automation also helps with this, as you’re able to control both thermostats and lighting from your handheld mobile devices.

Burglars tend to know the areas they’re robbing fairly well – so should you. Get to know your neighbors; contact the police, ask them for statistics of crime in your zip code, and follow the local news. These are easy ways which you can be aware of potential problems that might be happening and allow you to take proper precautions.

Admittedly, while thinking like a burglar can be fun, getting your home broken into is not. You’ll find that many of these tips are cost effective and will generally bring you a peace of mind and sense of security knowing that you have made your home into a more secure place by tapping into the mind-frame of those who wish to disrupt it.