Never Answer the Door (if you aren’t expecting someone) 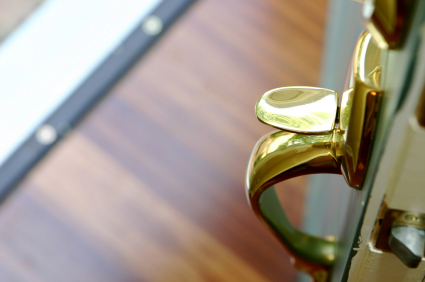 This concept may sound weird to you if you grew up in a small town as I did. My family used to go on vacation for a month and leave the front door on our house unlocked the whole time. Granted, those front doors were in two very small country towns, so I guess things are a bit different there than in the “real” world of living in an actual city in America, which I learned over time. I remember hearing in college of sketchy people that would walk around knocking on doors and if/when someone answered they would come in and rob, rape and basically pillage the place they had just gained access to. And this isn’t some urban legend, there are countless stories that start and end this way.

It may sound extreme, and in some cases even rude to leave a door unanswered. But if you aren’t expecting someone at your door, think of all you have to gain and all you could potentially suffer from just blindly answering when someone randomly knocks on your door. You are the first line of defense in your home’s security, and you don’t want you or you family to be the subject of a neighborhood  horror story, do you?

If you don’t already have one, install a peep hole on your front door. Ideally go for the bigger one with the large lens so you don’t have to stick your face right up against the door to see who is there. The larger models almost look like a circular LCD screen (in the day and at night as long as you have the porch light on) and enable you to see your whole front stoop and whomever may be there, from head to toe.  With smaller traditional peep holes you have to stick you face right up against the door and outsiders can see the blockage of light as your face sidles up to the peep hole, so they will know you are there, which really doesn’t benefit you at all, especially in the case of a would-be rapist, right?

Add a camera to your front and back of house areas to deter would-be ruffians and, in worst case scenarios, to record any damages/violence for evidence for your insurance company or police after the fact. The simple fact of having a camera(s) at your house may be deterrent enough for most thieves and we need all the support we can get to fend of these wanderers of ill repute, yes?

So though it may feel weird or silly, talk to your local police officer in your neighborhood and they will tell you the stats if you don’t believe me. It’s better to risk coming off as a little rude or strange than to risk you or your family’s well-being, right? And this will be a great lesson for your children as they start venturing away, and eventually move away from the nest. College towns are common targets for home invasions and rapes, so it is absolutely essential that your sons, and especially your daughters, take this lesson with them whenever they are away from home.