Household Items that Could Save Your Life 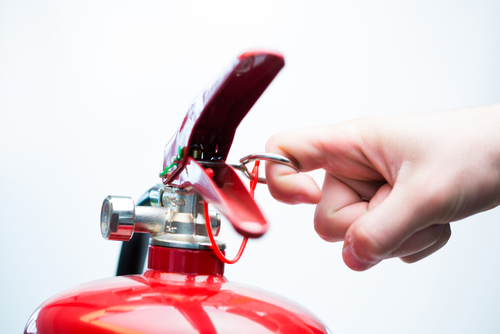 You probably don’t want to think about what you would do if somebody attacked you in your home because you don’t want to think about that scenario at all. But it’s that type of denial that could stand between you and survival in a worst-case scenario. Familiarize yourself now with items around your home that could work as a weapon or deterrent, because in a real life-threatening situation, you’ll be too stressed to figure it out. Here are household items that could save your life.

This can be used in several ways. If you have the time, you can activate it and spray it at the attacker. This will nearly suffocate him and most likely make him go unconscious. If the attacker is already too close to you, you can hit him over the head with it—it’s very heavy. You can then spray him to finish the job.

If you have a particularly heavy lamp, that’s great just for the blunt force. But even a light lamp has a light bulb in it that will ideally smash on the attacker’s head, getting broken glass in his eyes. At the very least you’ll get broken glass all around his feet, slowing him down.

A clothing iron is incredibly heavy and can be used to hit an attacker over the head and knock him out. Even if you can’t get close enough to hit the person, throwing a heated iron at someone can cause a lot of damage.

If you have your bikes locked up with chain locks and can access them, grab the chain locks. These are very heavy and can be used to hit or even strangle an attacker.

If a criminal should set your house on fire or set off a carbon monoxide leak, the cup of a bra could temporary block out dangerous debris and smoke while you escape. It’s just the right size to cover the mouth and nose and is usually made from durable material. You can even use the straps to tie it around the back of your head if you need your hands free to push items out of your way.

Pens might seem harmless, but if you apply enough force, you can lightly stab someone with a pen. Aim for the eyes, neck or arteries.

This seems like an obvious one, but when somebody is attacking your home, you won’t think of the items in your garage. But do. That’s where you have shovels, rakes, hoes and other very dangerous items.

The base of a landline phone is actually quite heavy. If you hold the handset down, you can ground the entire weapon while you fling the base at the attacker.

An open food can

Open food cans are actually extremely sharp. If you have the round lid still around, even better. These can be used like a knife.

A bat would of course be the best athletic equipment, but if you don’t have that, use a tennis racket. The outer rim of a tennis racket is actually quite blunt and can hurt someone’s head if swung with force.

If you don’t have pepper spray on hand, grab the nearest spice like pepper, crushed pepper or salt. Even crushed paprika or any crushed herb will help, because it will irritate the attacker’s eyes.

You can’t take a criminal out with household products, but if you spray some floor cleaner or bleach into a criminal’s eyes, you’ll certainly set him back while you escape. Hair spray, perfume, spray-on deodorant or bug spray also work great for this.

These are probably the most readily available to you in any room (kitchen towels, bathroom towels, bedroom blankets.) Throwing one at an intruder’s face will temporarily blind him while you escape.

Movie scenes where someone is whipped with a belt are painful to watch, but for a reason—thin strips of leather, when whipped rapidly, can really cause some damage. You probably have one on when the attacker attacks so you can quickly access it.

You may never look at your belongings the same again, but you’ll be grateful for that if the worst-case scenario ever does take place. Ultimately though, your brain will be your most powerful weapon in an attack scenario: when used wisely, it can turn almost any object into a weapon.